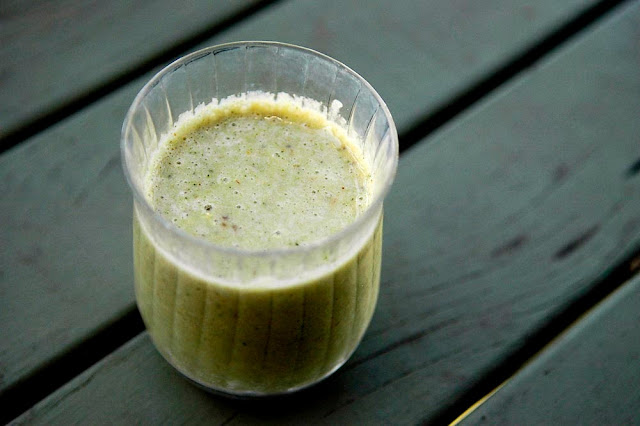 Ha - I wondered if that "Best Ever" would get your attention. Have you seen a zucchini cake smoothie before?

Didn't think so. Let me share one with you.

Zucchini's one of those magical veggies that often finds itself gobbled up by unsuspecting kids - in muffins, pancakes, cookies (in development, I promise), pasta sauces, even salsa (if they like the spicy stuff) ... And yes, cake, though what kid won't gobble cake regardless? It's a great source of fibre, folate, potassium, vitamin A and manganese, but let's be honest, you're probably not going to eat zucchini for its nutritional qualities - you're going to eat it because your garden or your neighbour's garden has produced obscene amounts of it, or because you were inspired to buy 3 kg at last weekend's farmer's market. And now what?

In theory, I'm not a huge fan of sneaky foods - I think my daughter should be able to see what she's eating, and know it for what it is. But sneaky stuff definitely has its place alongside real food. Particularly when everything gets blended anyway - really, food in smoothies or soups or dips is all sneaky.

But you might have to engage in a little brainwashing before making this. Start a day or two ahead of time ... "Green is so cool. And delicious."

I hope you're not disappointed when I tell you there's actually no cake in here, but here's the thing. You can make this smoothie - in all its healthful (vegan) glory - and still sit down and EAT a slice of cake with it. Should you so choose. The almond milk here gives it a tasty nuttiness - and I bet cashew milk would be EVEN YUMMIER. Feel free to substitute your favourite (other) kind of milk.

*Try to use organic when you can
The process
Blend. And. Drink.

The cost
I save up my bananas in the freezer when they start to brown too quickly, and these zucchini were leftovers from a big BBQ we had for Nelle's birthday. So really, the cost here was the almond milk, if you think about money the way I do [note: using stuff up = saving money]. I estimate this costs me about $2 per organic batch.
Labels: afterschool food easy breakfast recipes green smoothie organic drinks organic food for kids vegan smoothie vegetarian beverage what to do with too much zucchini wholefood snacks zucchini cake